Bookie Online Casino: Quick Guide to Inside and Outside Roulette Bets

Roulette is probably the most played game both at the bookie online casino and at land-based ones, and even though its rules are not 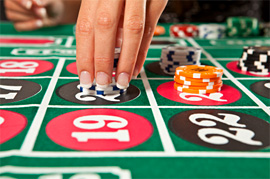 complicated at all, we have prepared this article where you can find information on the basics of the game.

This is just in case you are one of the few out there whom haven’t had the chance of testing your luck with such an attractive game at the bookie online casino.

When it comes to playing roulette, the player of the price per head agent will be trying to predict the actual number that will match the favored ball in every play.

The board layout for the roulette at the bookie online casino is divided in a variety of sections, including the section for individual numbers, and the one where the player has the chance of making group bets.

The wagers which are made on either an individual number or on a small group of them are known by players as “inside bets” while those which cover a large group of twelve to eighteen numbers are known as “outside bets”, and these include wagers on the colors red or black and similar.

The following are the types of inside wagers allowed in roulette at the bookie online casino:

Straight up: This is a wager where the player will be choosing a single number to place his bet, and it can go from the number double 0 to the 36.

Split bet: This is a wager where a betting chip is placed on the line between 2 adjacent numbers. This gives the player the chance of winning half the wager on each of the two numbers chosen. It includes a split between numbers 00 and 0.

Street bet: This is a wager that is placed on 3 numbers in a row, and which is placed on the line that is located at the end of the row.

Corner bet: This is a 4-number bet that is placed exactly on the corner where such four numbers touch.

Line bet: This one is made of 6 numbers (two rows of three numbers), which is placed exactly at the end of 2 rows on the line that is between them.

Outside Bets (even pay)

There are the “outside bets” that are found at the bookie online casino:

Column bet: a wager on an entire column.

Dozen bet: Betting on a group of twelve numbers on any of the 3 12-number boxes.

Color bet: A wager on the colors red or black.

Even/odd wager:  A bet on all odd or even numbers.

High/Low number:  A wager on all low or high numbers.