Do you want to be your own boss? Working directly from home or from your own office and make great profits that can allow you to 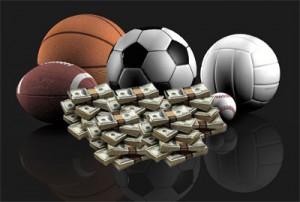 considerably improve your lifestyle? If the answer to these questions is yes, then you will probably be interested in starting a Bookie freelancing career.

In a series of articles, we are going to explain you all that you need to know in order to get you started and become successful.

In this article, we are going to talk about the concepts of Sports Betting, the center of it all in a Bookie business and understanding such concepts is vital if you want to start your freelancing career with the right foot.

Betting on sports has been an American gambling tradition for decades. People in the United States and other parts of the world not only bet because they can make a profit, but also because they consider it a fun activity and even a hobby.

When you bet on sports, you are predicting the results of a given sporting event and risking a determined amount of cash on your pick.

Let’s take the NFL as an example: The Super Bowl is one of the most famous sporting events, and people certainly have their favorite, a team that they believe has the most chances of defeating the other.

If someone is so sure of the superiority of a given team, chances are that such person might be willing to risk some money to earn something extra.

Others don’t really care which team is the best as they just want to make a bet on the favorite for the fun of it.

Betting on sports is definitely a year-round activity and a great source of regular income, which is why this is a great freelancing opportunity for the right individual who is willing to take the time to learn about how to properly run a freelancing Bookie operation.

Although bettors are fonder of placing wagers on the big American leagues such as the NFL, NBA, MLB and NHL, they also enjoy making bets on major sporting events, either locals or internationals, including renowned soccer, tennis and golf events (plus many more).

There are billions of dollars in profits related to sports betting, and you can indeed get a piece of the action by becoming a freelancing Bookie.

The Money Line: This is a straight up winning or losing bet and it works with a “ten cent line” or “Juice” (typically, but it can vary) which means that for every $110 dollars a player bets, he gets $100 in return if he or she wins (for a total return of $220 in this particular case).

The Spread: This is a special handicapped line created by the Bookie in order to give both teams a more balanced chance of winning, no matter if they are considered either the favorite or the underdog.

The Total: This wagering line is the combined result of both teams’ scores at the end of a game, and players can bet a game to go either over or under the specified total.

For example, in an NFL game the total can be of 40, so if someone bets the game to go over the total scored by both squads at the end of the match, and the final score is 21 to 24, that person wins the bet because the combined score is of 45 points.

An odd is the chance that a given outcome will take place against the chance that such event will not happen. Although there are different kinds of odds, you, as a freelancing bookmaking agent, are likely to be working with the American format or moneyline odds.

US odds are the amount won on a 100 stake when they are positive and the actual stake needed to win 100 when negative. American odds of 100 are an even wager.

For a more complete explanation on the different types of odds, here’s a very useful resource:

When it comes to placing wagers, bettors have a variety of options, and amongst the many types of bets, here are the most frequently used:

Straight Bets: This is the simplest type of wager and is made against the money line or spread, which is a line that is assigned by the Bookie. In such line, a team is favored and the other one (the underdog) is handicapped.

On this particular line you will notice that one of the teams has a plus and the other one has a minus sign next to the number 5.

The team with the plus sign is the underdog or handicapped team, and the one with the minus sign is the one the Bookie assigned as the favorite for this particular match.

For betting purposes, it is common that the home team is going to be considered the favorite (although this is almost always the rule, sometimes the visiting team can also be favored) and it will be found below the underdog on the betting line.

For this particular wager, we can assume that the game is taking place in New York and that the Giants have the most chances of getting the victory.

Let’s say that this game finished 27 to 20 with the victory going to the Giants. What we do if we want to determine the outcome of a wager is either to add or subtract five points from the final score of each individual team.

In this case, the winning team was the one the Bookie considered the favorite, the Giants, whom scored 27 points against just 20 by Denver, the visitors.

As stated above, the line the Bookie gave to the Giants was -5, which means that we need to subtract five points from the total scored by the agents. When we take off 5 points from the 27 points scored by New York, we end up with a total of 22.

Since the Broncos scored just 20 points, this means that even after subtracting five points from the Giants’ total, the NY team still wins the game for wagering purposes 22 to 20.

Let’s now explain how the handicapped team can win a bet even when it lost the game using the same wagering line but with a different final score:

On this case, the final score of the game was 23 to 20 favoring New York. As you can see, in reality the Giants won the game, but for betting purposes Denver won the bet.

This is because the Broncos have a line of +5, so we need to add five points to the total score. This means that for betting purposes, the Broncos won the game 25 to 23.

Proposition Bets: These are also known as props and are very specific predictions related to a specific outcome of a given sporting event.

Parlays: Although a parlay might not be easy to win, it pays very well. Here is a good explanation:

A parlay is basically a combination of different straight bets in the same wager (the typical Bookie accepts parlays of up to twelve picks).

Many bettors love the big payouts that they can get by winning a parlay, but the reality is that the Bookie always has the edge, not only because he’s the one that chooses the betting lines for each pick, but also because the bettor must win all picks to win the bet.

If a bettor is lucky enough to win the full wager, he will get paid about 10-1 (in the case of a parlay of four picks).

On a 4-team parlay, for example, if one of the picks end up being a tie (where the two teams scores even at the end of the game), then the parlay becomes a 3-team parlay.

Progressive Parlays: This type of wager is similar to a parlay but it is different in the sense that the payout is smaller and the risk is less.

On a regular parlay, the only negative outcome can be a tie, but on a progressive parlay, a bettor can actually lose a pick and still win the wager.

For example, on a 4-team progressive parlay, the wager is valid until one of the picks losses. Let’s say that game one on the parlay is a win, then the wager advances to the second pick and the payout is adjusted accordingly.

If the third pick is a loss, then the wager does not advance anymore and again, the payout is re-adjusted.

Teasers: A teaser allows bettors to adjust the spreads on two or more picks. This certainly gives the player an advantage, but he or she must be able to get all picks correct in order to win the wager and the payout is also lower when compared to regular parlays.

If Bets: This type of wager is similar to a progressive parlay but it is a bit more difficult to win since there is an “if clause” involved. This means that for the bet to progress from the first pick a given condition must be met, and then the second pick in the wager will become active.

Run, goal and puck lines: These bets are an alternative to wagering on the money line and are unique to baseball, soccer and hockey respectively.

They all feature a fixed point spread and they offer a higher payout for the favorite team and a lower one for the handicapped team when compared to money lines.

Futures: Although all wagers can actually be considered “future bets” because you are trying to predict the outcome of a given sporting event, when someone places a future wager he or she is betting long-term.

For example, someone can place a wager for the Giants to win the Super Bowl before the regular football season starts.

Depending on the bettors’ pick, this wager can actually end up being quite profitable, although it is tougher to win it because, for example, New York can lose its first-string quarterback early in the season, which can pretty much turn into a death sentence for the Giants.

In-Play Wagering: There are some agents out there that allow their players to place bets while a given sporting event is taking place. This is a quick type of betting and the odds can really vary depending on how a game is currently developing.